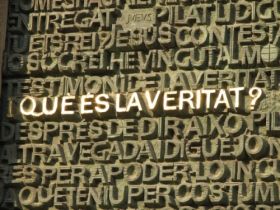 In the 1930s, Arne Næss ran a series of empirical studies on the concept of truth, which have been largely ignored not only by experimental philosophers but by philosophers working on theories of truth. At least one salient reason for choosing to ignore Næss’ work is that the data are old, out of date, and cannot possibly be applied now because how we use the concept of truth today differs greatly from how people in the 1930s used it. Since usage may be indicative of a change in word meaning, an empirical study that explores historical changes in the meaning of the word ‘true’ may suggest that such a criticism is not well-founded. If, for example, it can be shown that ‘truth’ and its cognates are embedded in dissimilar vector spaces, then the challenger is correct. In this paper, I test this hypothesis using a powerful new device of linguistic corpus analysis, The Macroscope (macroscope.tech). I show that the challenger’s analysis is incorrect because there has not been a radical semantic shift in the use of ‘true’ and its cognates. The corpus data also suggest that the findings of Barnard and Ulatowski (2021) are correct.