North Korean Community and One Korea School in London 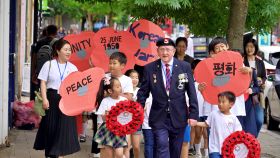 90 minutes of documentary screening followed by a conversation with North Korean migrants and the documentary director, Jeonghoon Jang.

Mr Jang has directed a number of special documentaries, including "Sensational" on tvN and Amazon and 'Next Human' on KBS and Netflix. In 2015, he won the EBS Broadcasting Award. This documentary received the Hollywood International Golden Age’s Best International Documentary Prize in 2022.