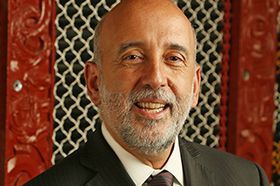 The New Zealand Treasury's chief executive Gabriel Makhlouf will give a public address on Wednesday, 7 March on the topic of 'Natural Capital and National Wellbeing'.

Members of the public, staff and students are welcome to attend this prestigious event, being hosted by Waikato Management School at the University of Waikato in Hamilton.

As the government's chief economic and financial advisor, Mr Maklouf will talk about Treasury's ambition to integrate a broader concept of economics and value into the everyday work of public policy, through its new Living Standards Framework. He will also set out Treasury's plans for creating an effective set of wellbeing indicators for New Zealand, and how people can support this challenging and exciting work.

Mr Makhlouf believes this will require a leap of thinking, but one that is necessary if the Treasury is to stay at the leading edge of economic policy.

Traditionally, economists have focused their thinking on the factors of production, such as land and labour, and how these are combined to create goods and services.  The Living Standards Framework is an adaptation of this notion: the four capitals – natural, human, social and financial/physical – are the stocks which combine to generate flows of wellbeing.

Mr Makhlouf will also discuss how the development and application of the Living Standards Framework is progressing, with a particular focus on natural capital.

As CEO & Secretary, he leads the Treasury’s work to help raise living standards for New Zealanders through a stable, growing economy and a high-performing public service.

This 20-minute talk will be followed by a 40-minute Q&A discussion.

No RSVP is required if you wish to attend, just come along on the day. Please be aware that seating is limited.

Parking is available in the Gate 10 carpark off Silverdale Road, Hillcrest, Hamilton.

The son of a United Nations official, Mr Makhlouf grew up in Africa, Asia and the Pacific and speaks French and Greek.

Before joining the New Zealand Treasury in 2011, his career was previously in the United Kingdom civil service where his responsibilities ranged from policy development on domestic and international tax and welfare policy issues through to large-scale, customer-focused, operational delivery.

He was Chair of the world’s main tax rule-making body – the Committee on Fiscal Affairs – at the OECD in Paris between 2000 and 2004, and was also responsible for the UK’s Government Banking Service. He served as Principal Private Secretary to the Chancellor of the Exchequer.