Celebrating the power of protest 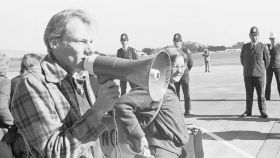 John Minto was the former National Organiser for HART (Halt All Racist Tours) which organised the huge protests against the 1981 Springbok Tour of New Zealand. John will talk about the power of protest, specifically civil disobedience protest, with reference to the Hamilton protest in 1981 which had such a dramatic impact in Aotearoa and South Africa.