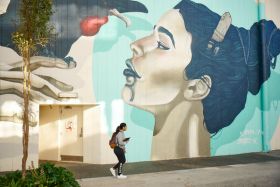 BOON on Campus is back and taking place from 7 March onwards 2022.  Boon on Campus will see a handful of artists painting murals around the Hamilton campus throughout the week.

BOON on Campus is back and taking place from 7 March 2022.

In 2020, The University of Waikato’s Hamilton campus was transformed into a bolder, brighter and more inspiring place to study, visit and work. This year, Boon on Campus will see a handful of artists painting murals around the Hamilton campus. There will be multiple canvases in different locations, highlighting the Hillcrest road side of campus.

This year, BOON on Campus will be showcasing the festival digitally through videos, images and interviews.

A five-year partnership, transforming the University of Waikato into a bolder and brighter campus.

Keep up to date with Boon on Campus by following the University of Waikato on Facebook and Instagram.

The artists and their pieces

TECHS_X’s concept is inspired by the story of Tane and his ascension to the heavens in hopes to retrieve knowledge for mankind on earth. While Tane descended the heavens, a bird followed him carrying the power of knowledge. The bird, now identified as Kiwa/Frigate, was seeking to nest in Waikato.

After some time on earth, the bird realised it needed to return to the heavens to restore its immortality. Before returning, it selected a few pupils to shine bright and share its ability of knowledge, starting a chain reaction with the selected pupils that was handed down to their generations.

The anchoring quote of his piece: “Whåia te iti Kahurangi Pursue that which is precious, and do not be deterred by anything less than a lofty mountain!” Through his mural, he depicts this quote as knowledge is what we aim to achieve in life.

Kelcy’s piece aims to communicate the importance of whakapapa (genealogy) and higher learning by way of the complex and incredibly vast and layered space of te ao Māori. It seeks to engage in ideas of space outside the limitations of the human sensory system and what we think we know about our world. It embodies the freedom of creative play with visual elements that acknowledge customary art forms. It explores the structural elements that constitute tukutuku - the woven panels located within the interior architecture of the wharenui. Tukutuku is a cultural container, with cyphers holding within its composition sacred mātauranga Māori and whakapapa. Tukutuku refers to ‘Te Ira Atua’ (the realm of deity), a strong link to notions of possibilities and creative potential. The artwork seeks to acknowledge the relationship between the tauira (student), kaiako (tutors) and the wānanga (institution). There is a whakapapa established through nurturing of the mind of the student by the tutors, and this whakapapa binds the student, tutors and institution.

Kia whakatōmuri te haere whakamua ‘I walk backwards into the future with my eyes fixed on the past’.

His design responds to the Māori view of past, present and future and how they are intertwined. The portrait shows the shifting of one moment into another, with a person in the present and in the most recent past.

The figure looks forward, into history, into the forest of Karipūkau when giant kahikatea and tawa trees stood on the whenua and kererū abounded. Behind the face the future is abstract and undefined, still to be discovered. The mural emphasises human potential and the power that a person can draw from the awareness of and connection to the past.

It also reflects the University space as a place of learning where colour represents knowledge. This painting incorporates loose illustrative modernised Māori taniwha, creating a connected multi-coloured body. It explores notions of connection, re-connection and disconnection, in a culturally diverse urban culture.

Regan depicts a woman who represents a student attending the University. The vessel of knowledge that is being held - a wakahuia - (this wakahuia image is modeled on a wakahuia in the Taonga Puoro collection held at the School of Music) is a receptacle of knowledge that has been gathered from the work of so many before us. This knowledge is available to the learner to form a strong foundation, then through exploring further, adding to and striving forward, the potential and power of this knowledge unlimited.

The hair from the woman is blown back from the energy emanating from the wakahuia (treasure box). The design behind the woman was inspired by the artwork at the Tauranga campus created by Whare Thomson which connects the Kirikiriroa/Hamilton campus to the Tauranga campus. The pou, or large designed posts, connect humanity reaching up towards universal knowledge and aspiring for excellence.

The design makes reference to the tall trees of the forest that once stood on the land that the University of Waikato now occupies. This also pays tribute to the other tall trees from 'Te Wao nui a Tāne' or, The great world of knowledge and enlightenment, who have gone before and the ones who are growing for the future.

Watch the full video below.