The annual University of Waikato Blues Awards (Blues) are one of Waikato University’s strongest traditions, recognising our students' highest sporting and artistic achievements.

At the University of Waikato we hold strong to the belief that people are central to the success of the University. The Blues are one of our biggest celebrations of success in sports and the arts. Our first Blues were awarded in 1971, with the tradition of the Creative and Performing Arts Blue joining the Sports Blue in 1990.

There are awards for individual and team achievements, emerging talent, and for service to sports or the arts. 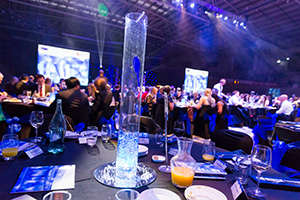 Nominations for the 2019 awards are now closed

For any queries around nominations email Mary-Jane Waddington at mjw@waikato.ac.nz

More information will be available shortly. The Blues celebrate the commitment and achievements of students and acknowledge their contribution to the University of Waikato.

The awards also recognise students and non-students who play a valuable role in University sport and the creative and performing arts scene, either through coaching or administrating.

Blues Awards recognise national excellence through to world champions. They are a symbol of commitment and dedication that students are proud to receive, display, and even add to their resumés.

See past Blues winners from:

There are no upcoming events in this series.