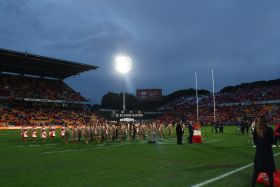 In recent decades, activism around Indigeneity, Indigenous relations, cultural reclamation, survivance, and flourishing have also produced new ways of claiming and making meaning with sport in the Pacific and elsewhere.  In some cases, it involves negotiating colonial legacies imposed on longstanding Indigenous sporting traditions (surfing and lacrosse); in others, reclaimed Indigenous sport activities are reinvigorated as expressions of cultural traditions and sovereignty (traditional games and sporting events); still in others, presence in numbers means formerly colonial or otherwise foreign games are claimed “for the culture” and become another way of narrating identities (rugby, league, football). Yet these different engagements take place in the wider context of significant global movement, commercialization, and neoliberalization. What does it mean to indigenize sport? For whom and to what ends?  This talk considers how Indigenous peoples use sports as avenues toward recognition, opportunity, and as a way of narrating community achievements to themselves and others, even as they navigate colonial, racist, and marginalizing social dynamics and institutional structures toward new futures. In parsing different kinds of cases, we explore the prospects and complications for indigenizing sport.

Dr. Lisa Uperesa is Senior Lecturer in Pacific Studies at the University of Auckland. One strand of her research includes post-/colonial formations, Indigenous politics, and contested sovereignties at the heart of U.S. empire. Another explores the place of sport in Pacific communities, with a focus on culture, political economy, and gender. Her first book manuscript (tentatively titled) Fabled Futures and Gridiron Dreams: Migration, Mobilities, and Football in American Samoa is under contract with Duke University Press.  Previous teaching appointments include University of Hawai`i-Mānoa, Columbia University, and Hofstra University. She currently serves on the Council of the Polynesian Society, has served as Acting Director of the New Zealand Institute for Pacific Research, and is a former Chair of the Association for Social Anthropology in Oceania.