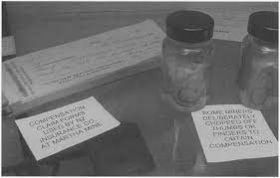 The Miners’ Thumbs in Waihi Museum: The Truths Behind The Yarns

Recently an article titled “Paying Your Bill at the Pub: Why Waihi Miners Deliberately Chopped Off Their Own Thumbs” was published on a national media site. It focussed on a pair of pickled human digits displayed since 1962 at the Waihi Arts Centre and Museum, with a caption saying “Some miners deliberately chopped off thumbs or fingers to obtain compensation”. The main informant for the article was a “Waihi historian” with links to the museum, who claimed that in the period 1920s-40s “it was relatively common for a digit to come off before Christmas”, and while “a lot of men did lose digits in mining accidents, a lot were done on purpose as well because they were big drinkers, and they also had gambling bills”. The article likewise cites the caption for a photograph of the thumbs in Te Ara Encyclopedia of New Zealand, and whose copyright is credited to the Waihi Museum, which says that when the mining company’s insurers “refused to pay out for ‘neatly severed thumbs’… miners began to use detonators, sometimes with horrific effects”. My paper argues that whereas officially-sanctioned stories about the Waihi thumbs have become more colourful and ideological in recent decades, supporting factual evidence has remained very scarce. Furthermore, given that the thumbs on display are human body parts, major ethical issues still need to be addressed.

Dr Tom Ryan is a Research Fellow in the Anthropology Programme. He has historical family links to Waihi, and has himself worked in the mining industry. Tom’s publications include “The Miners’ Thumbs: Re-Membering the Past in the Waihi Museum”, Journal of New Zealand Literature, 23:1, 71-95, 2005.