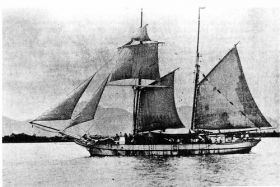 Beginning in the 1870s, Malaita in the Solomon Islands became a major new labour frontier for Queensland and Fiji, and over several decades ships carried thousands of men from the island to work on farms and plantations there. This talk is a comparative analysis of archival and oral historical accounts of three daring attacks on Australian and Fijian recruiting ships in the 1880s by men of Kwaio in eastern Malaita. Kwaio oral histories tell us much about what is invisible or erroneous in period documents, while archived accounts expose puzzling distortions in the oral histories. The talk draws out these distortions and asks where they came from. The answers illuminate how many Kwaio and other Malaitans through the years since the attacks have conceived of their relationships with Europeans, foreign ways, and the global geopolitical system. A comparative approach here reveals things that neither anthropologists nor historians can get at in any other way.

David Akin is an anthropologist and historian who has spent some seven years living with Kwaio people on Malaita since 1979.  He is currently working with the community there to build up a locally-run digital archive at Kwainaa`isi, in the central mountains.  He is the Managing Editor of the journal Comparative Studies in Society and History, based at the University of Michigan in Ann Arbor.