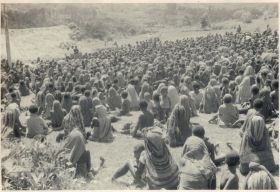 Rhizomatic Assemblages: Towards a Deleuzian Conceptualisation of Charismatic Revival

In their book A Thousand Plateaus (1987), French philosophers Gilles Deleuze and Felix Guattari advocate the botanical metaphor of the rhizome as a model for forms of liberatory, decentred, and multiplicitous political action that constantly evade, transcend, and undercut the centralised, hierarchical, and hegemonic regimes of late capitalism, which they encapsulate with the contrasting botanical metaphor of the tree. Despite Deleuze’s unequivocally negative assessment of Christianity, theologically minded authors have already noted the similarity of some Deleuzian concepts to phenomena found in global Christianity’s revivalistic spread. In this presentation, Dr Fraser Macdonald interrogates the utility of applying the concept of the rhizome for understanding the rapid intensification of charismatic revivalism that occurred in Melanesia during the early 1970s. Preliminary considerations reveal a range of vivid parallels in terms of revival morphology, organisation, ethos, and leadership, all of which contrast, often radically, with the arborescent, tree-like structure and practices of missionisation.

Fraser Macdonald is a Senior Lecturer in Anthropology at the University of Waikato. He specialises in the study of Melanesian Christianity and has explored how Pentecostal, evangelical, and charismatic modalities intersect with indigenous religious and cosmological frameworks within a range of cultural contexts. Currently he is working on a project examining the reshaping of Melanesian Christianity in the early 1970s as a result of a wave of charismatic revival movements.