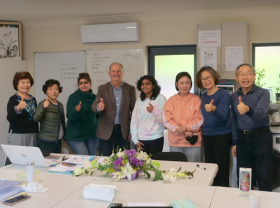 Jinah Lee earned her PhD at the School of Education, University of Waikato. Her doctorate research was about Asian migrant women’s identity negotiation as language learners. Her research had a cross-disciplinary approach rooted in her diverse academic and professional experiences as well as her social identities like an Asian migrant mother. Current publications she is working on include a narrative autoethnography of otherness, multicultural aspects in NZ curriculum, and migration as forced feminisation to Asian women.